skip to main | skip to sidebar

All the Park's a Stage, for Alexandria Players

The Alexandria Players was formed in August 2008 by the cast of "Rain & Thunder: Dialogue Between Gaia & Jehovah," which was performed outdoors on the rock-stage at the Fairfield Community Place as part of a "ROCK OF PAGES" literary event. Founding members included Ian Arnold, actor, director and playwright, actors Sara Asyyed, Linda Foubister, Geraldine O'Flaherty and writer Sandra Barbara Julian.


"The Council of the Animals" was performed as Readers Theatre at The Hub, 829 Fort Street, Victoria, on November 2019. A comic spoof of municipal politics. See how the wildlife would run a city, if Beaver, Raccoon, Rabbit, Snail, Squirrel, Deer and Canada Goose were given the chance:

November 9th Readers' Theatre:
LAND OF LAKE AND WOOD
at Cook Street Village Senior Centre's Remembrance Day luncheon, Victoria.
(Based on memoirs of post-WWII immigrants to Canada. The title comes from a phrase in
Susanna Moodie's Canadian classic Roughing It In the Bush)

February 15, 2019, Readers' Theatre:
THE SHADOW GUEST
by S. B. Julian
Valentine Day Lunch at Cook Village Activity Centre
Cupid lurks in the halls of a residential hotel and residents are comically haunted by past loves.

The Alexandria Players theatre troupe takes its name from the great lost Library of Alexandria, which was regarded in the ancient world as home of the nine muses, the inspirations for all the arts and scholarship: 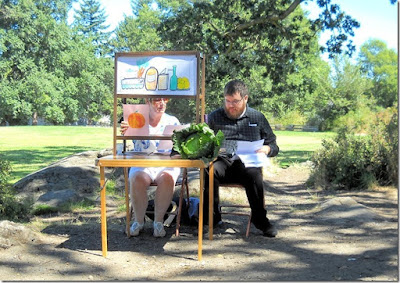 WAITING FOR GERTRUDE in Two Places

WAITING FOR GERTRUDE
Time and longing in the graveyard: a colony of feral cats living in Pere Lachaise Cemetery in Paris are reincarnations of the famous artists, musicians and writers buried there. The cat Alice B. Toklas awaits the rebirth of Gertrude Stein in cat form, while Tristesse yearns for Oscar Wilde, who yearns for rock star Jim Morrison, who lusts after everyone else. Magic potions are concocted, strange objects are lost, and Marcel Proust (P.I.) curls up in a ball and looks for the answers in his own orifices.
Basing it on the comic novel by Bill Richardson, Alex Players performed this at Oaklands Green on Belmont Avenue to appreciative audiences. DONATIONS raised were shared with VICTORIA CAT RESCUE SOCIETY.

Waiting For Gertrude was performed again in the tent at the Selkirk Waterfront Festival, a challenging event as the performance tent was set up in what amounted to a thoroughfare. People, bikes, wheelchairs and baby buggies passed between actors and audience and even crossed the back of the set, but the actors nevertheless delivered their dialogue without missing a beat.
.

The Alexandria Players at "Rock of Pages" in Porter Park, August 2008 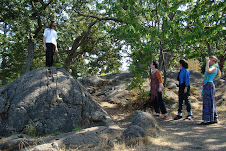